EU cooperation in the field of defence is advancing fast, creating new opportunities to innovate, create jobs and increase the security of our continent. Speaking at an event organised by the think tank Italia Decide in Rome on 12 February 2018, EU High Representative Federica Mogherini highlighted how the European approach of deepening cooperation across the board and taking a comprehensive approach to security showed an ambition which matched today's challenges. 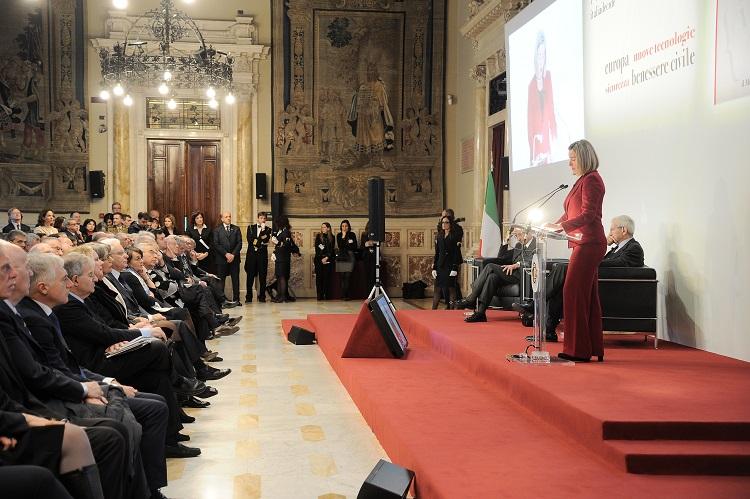 European defence has sometimes been seen as synonymous for the creation of a European army. This however, is not the path chosen by the EU and its member states, said EU High Representative Federica Mogherini in a speech delivered today in Rome.

The EU's approach is also distinguished by its emphasis on combining both military and civilian instruments. "The distinguishing feature of us Europeans is that we balance hard and soft power intelligently, because we Europeans know well from our history that there is no crisis or threat in this world that can be dealt with by military means alone,” noted the High Representative.

This approach, said Mogherini, will create "a European defence different from what was imagined in the fifties, or even in the nineties - simply because in the meantime the world has changed."

Since the presentation of the EU Global Strategy in June 2016 a lot has been achieved in the field of security and defence. New instruments and tools for more defence cooperation among member states have been created and existing legal frameworks activated. Even though this increasing commitment put forward by the EU member states meets an urgent demand for more European security and defence, it is at the same time a huge opportunity for the EU and its member states, highlighted Mogherini. It is an opportunity to invest together, to innovate and create jobs, support the economy and to provide the most technologically advanced equipment to European soldiers.

The European Defence Fund provides an example of how increased cooperation will deliver concrete benefits.  The Fund will coordinate, supplement and amplify national investments in defence. Through joint investment, member states will be able to develop defence technology and equipment that would otherwise not have be achievable. The Fund will also encourage innovation and allow economies of scale so that the EU defence industry can become more efficient and more competitive.

Moving forward, European integration in the field of defence exemplifies how the European Union depends on a combination of "ambition and pragmatism", allowing "the dream of a united Europe […] to be translated into concrete ideas and projects".

"But we must be careful," cautioned the High Representative, "our united Europe cannot just be a Europe of defence. European integration must also restart elsewhere" she noted, including in economic and social policies.

High Representative Mogherini concluded: "The work we've done on defence shows that change is possible, and it depends on us. Europe is what we choose to make of it, we are Europe.”