HR/VP Blog - Russia’s invasion of Ukraine has wide-reaching ramifications beyond Europe. Last weekend I was in Qatar and Kuwait, for bilateral visits, to speak at the Doha Forum and meet a range of international interlocutors. The war and its consequences were on everybody’s mind. To tackle its fall-outs, we need to strengthen our cooperation with the Gulf countries. 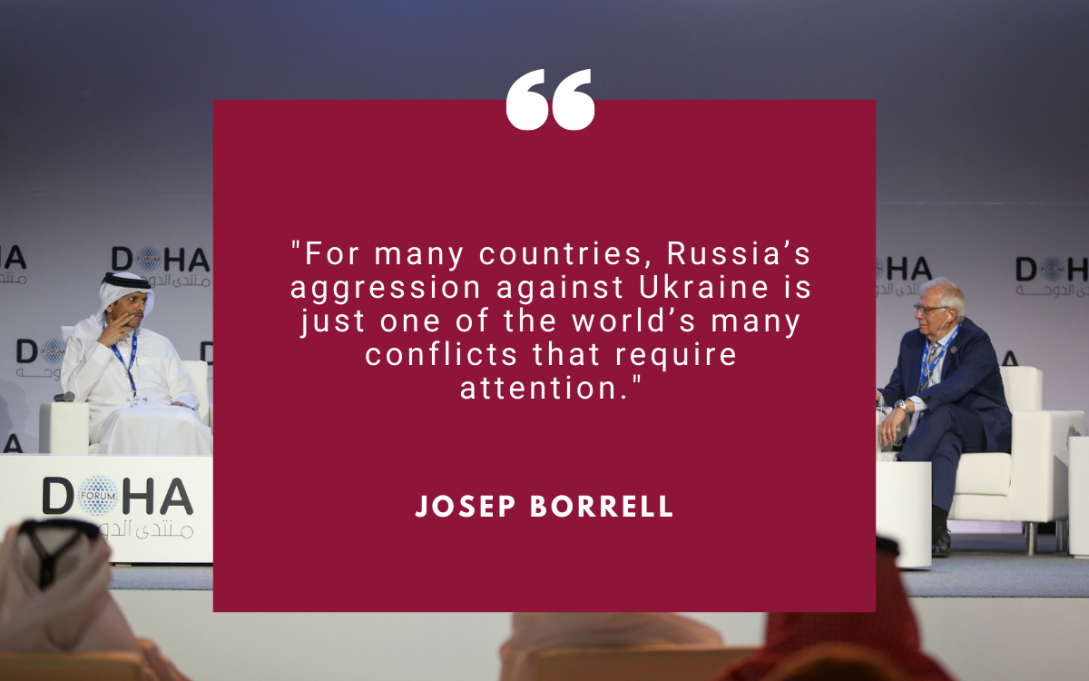 Just a few months passed since my last visit to the Gulf, yet the world is not the same: President Putin brought war to Europe at a scale and intensity not seen since the end of World War II. The Russian invasion is a defining moment for the future of the rules-based international order that will decide whether we live in a rules-based or a power-based world.

The Ukraine conflict as “one of many”

These questions were the main issues I discussed during the entire visit with representatives from the Arab world, the “Global South” and other Doha Forum participants. The virtual live intervention of President Zelensky at the opening set the tone for the Forum, but in my panel discussion and during my meetings with the Qatari and Kuwaiti leadership and other leaders, one thing became clear: while there is a shared principled opposition to Russia’s aggression and the use of force, the war in Ukraine is, for many countries, only one of the world’s many conflicts that require attention. Unlike in Europe, war has been part of the daily lives of many people around the world and particularly in the Middle East.

In addition, I heard various concerns as to whether the EU’s reaction and the sanctions we adopted might be ineffective when it comes to changing President’s Putin behaviour, and that they could hurt other countries’ economies and lead towards parallel financial systems and production chains.

With both Russia and Ukraine being important wheat producers (30% of global exports), Russia’s attack on Ukraine and its decision to stop exports, blocking the Black Sea, can indeed cause food insecurity affecting the lives of millions and potentially creating instability in the Middle East and in Africa. The EU is well aware of these risks and we are looking at ways to help the countries that are most badly hit.

Paired with many justified concerns, comes in many countries a narrative that accuses Europe of double standards, of being too self-centred and of not taking into account consequences such as increased food prices. And with their well-known machinery of lies and disinformation, Russia is playing on this type of concerns and older anti-colonial narratives, trying to blame the EU or “the West”.

“It is Russia that is causing huge human suffering, food insecurity, rising prices of various other commodities and the disruption of supply chains.”

To counter this, we need first to explain what is really happening on the ground and who is causing this immense damage to Ukraine and the whole world. It is Russia that attacked Ukraine in complete disregard for the rules of international politics and the UN Charter. It is Russia that is causing huge human suffering in Ukraine and making already 3.7 million people flee its violence, numbers increasing every day. The pattern of Russia’s military intervention in Ukraine, including the deliberate targeting of civilian infrastructure among other elements, tragically resembles its approach in Syria over the last decade, which caused equally dramatic suffering there. Clearly, it is Russia’s war against a sovereign country that posed no threat whatsoever, which causes food insecurity, rising prices of various other commodities and the disruption of supply chains.

Having this in mind, it is clear that the current crisis is not about “the East vs the West” or a conflict that is less relevant for the “Global South”. The war against Ukraine is not only a European or Western issue. It endangers the whole world, because it tries to endorse the approach that “might makes right’” as I said during the Doha Forum session – and the consequences of the Russian aggression will not be borne just by Ukraine or Europe alone. They will also be borne by vulnerable countries in the Middle East and Africa.

“The war against Ukraine is not only a European or Western issue. It endangers the whole world.”

I explained to my various interlocutors that the EU has since its creation always supported a world where international law is respected, where war has no place, where conflicts are resolved through dialogue and negotiations. We have always and everywhere tried to solve conflicts – be it in Palestine, in Syria, in Yemen or in Iraq – and contributed to alleviating the suffering of the civilian population with substantial resources. Not only now, when the war is happening in front of our doors. We will continue our efforts to defend the UN Charter and the international rules-based order. The EU is working towards the widest possible international condemnation and isolation of Russia and we want to work closely with Middle Eastern and Gulf countries to convince Russia to stop this senseless war. In this regard, we are glad that most Gulf and Arab countries support these efforts and also voted in favour of the two recent UN General Assembly resolutions condemning Russia’s aggression.

However, it is not just because of the reckless actions by President Putin that we have a major interest in developing a stronger strategic partnership with the Gulf. Last February in Brussels, the EU already discussed with Ministers from the Gulf Cooperation Council (GCC) a new level of ambition for our cooperation and during my mission, engagement has continued on energy and the green transition, regional security, global trade and security and safety of important trading routes.

One core challenge obviously is energy security and the needed acceleration of the green transition. In our meetings, both the Emir Tamim bin Hamad Al Thani and the Deputy Prime Minister/Foreign minister Sheikh bin Abdulrahman Al Thani confirmed Qatar’s interest in building a strategic long-term energy partnership with the EU. While the capacity to deliver additional LNG to Europe is limited in the short term, I am confident that Qatar is ready to reserve increased production for the EU as of 2025. This can be an important element for our REPowerEU strategy, both in terms of diversification of gas supply and supply of other energy sources like green hydrogen and renewables.

“Our partnership with the Gulf focuses on energy and the green transition, regional security, global trade and security and safety of trading routes”.

Also when it comes to, the EU and the Gulf are natural partners to promote de-escalation, dialogue and confidence-building. Here, a key area is for instance maritime safety around the Strait of Hormuz or in the Red Sea and the effort to improve situational awareness and information exchange mechanisms for all neighbours in the Gulf. The EU launched in February 2022 a new European Common Maritime Presence in the North West Indian Ocean, covering the seas from India to the Horn of Africa and the Street of Hormuz. Regarding regional security, I also updated my interlocutors on the status of the ongoing talks on the nuclear deal with Iran, and exchanged on the situation in Afghanistan, where our Qatari partners played and continue playing an instrumental role. In facilitating contacts with the Taliban de facto authorities, beyond the support provided to ensure evacuations and helping the EU to re-establish its presence in Kabul after the Taliban takeover.

In addition, I heard a lot about the ambitious steps undertaken to implement the “Visions” that leaders in Qatar and Kuwait have for their countries’ societal and economic change, ambitious as those of other partners in the region. In fact, these plans tally in many ways with the EU’s ideas for the future of our partnership

“We do not always agree on everything and differences exist, but the EU and the Gulf countries share many common goals and mutual interests.”

Naturally, we do not always agree on everything and differences exist above all when it comes to human rights for instance. However, I come back from my mission with the confirmation that the EU and the Gulf countries share many common goals and mutual interests on key global issues and that we should deepen our partnership to contribute to global responsibility and stability. Based on the February EU-GCC ministerial Council discussions, we will take this forward and concretise our ambitions in a ‘Joint Communication’ on the Partnership with the Gulf, which the EU plans to adopt in the coming weeks.