HR/VP Blog - Last week I participated in Buenos Aires in a CEPAL Meeting (Economic Commission for Latin America and Caribe, a UN body) and I co-chaired with my colleague Santiago Cafiero, minister of Foreign Affairs of Argentina, a EU - CELAC (Community of Latin American and Caribbean States) ministerial meeting. These meetings were an important milestone towards strengthening our "other transatlantic relationship" at times of growing geopolitical tensions. 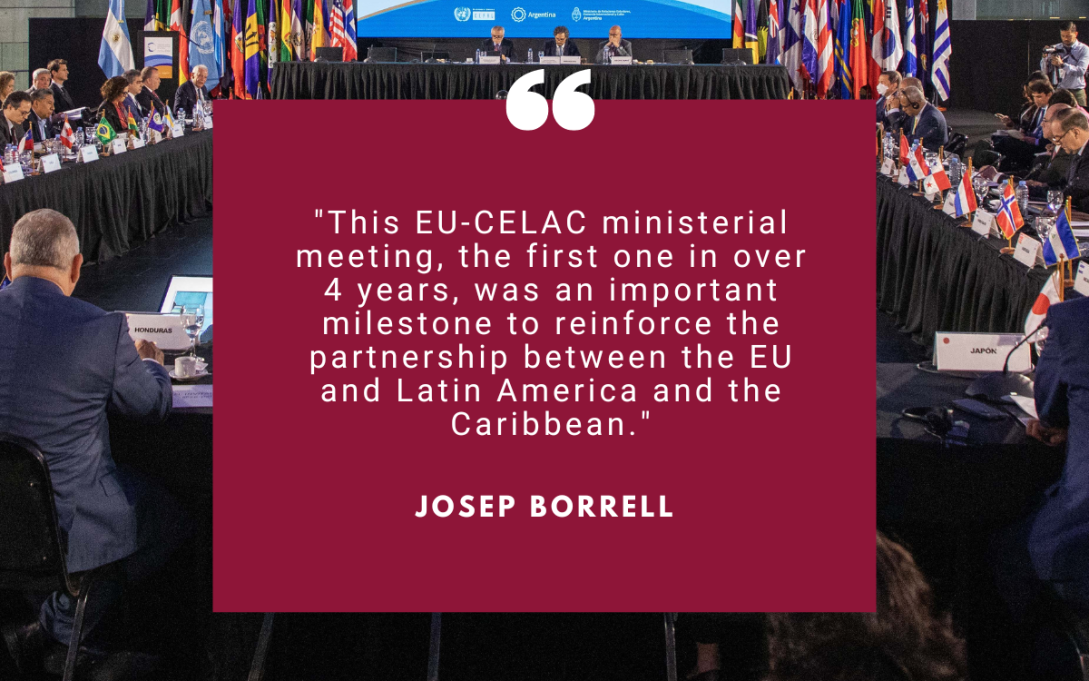 Since the beginning of my mandate, one of my main goals has been to revive what I have often called our ”other transatlantic relation”, the link between the European Union and Latin America and the Caribbean. In 2020 and 2021, the COVID-19 pandemic complicated this undertaking: for diplomatic affairs, VTCs can never replace direct contacts.

However, I visited Peru and Brazil in November 2021 and Chile and Panama in April 2022 to participate in a joint ministerial meeting of the Caribbean Community (CARICOM) and the Central American Integration System (SICA). Three years into my mandate, this EU-CELAC ministerial meeting, the first one in over 4 years, represents an important milestone on the road to a renewed and reinforced partnership between the EU and Latin America and the Caribbean.

“This EU-CELAC ministerial meeting, the first one in over 4 years, is an important milestone on the road to a renewed and reinforced partnership between the EU and Latin America and the Caribbean.”

It has brought together ministers and representatives of 60 countries from both sides of the Atlantic. It was made possible thanks to the much appreciated hospitality of the Argentinian government and in particular from my colleague Santiago Cafiero. In this sort of events, the possibility to hold multiple bilateral meetings in a very short period of time, probably plays a more important role to cultivate relationships and bring our continents together than the official meetings themselves.

“We share a deep attachment to a rules-based international order and a rejection of the “might makes rights” logic in international affairs.”

Our ties are also close politically: in particular, we share a deep attachment to a rules-based international order and a rejection of a “might makes rights” logic in international affairs. The war of aggression unleashed by Russia against Ukraine has shown this once again: in the Global South, Latin America is the region who most actively defended the UN Charter and the territorial integrity of Ukraine, in the various votes held in the UN General Assembly or in other multilateral fora.

Our ties are also close on the economic front. With a direct investments stock of €800 billion, the EU is by far the largest investor in the region and we are on our way to reaching the trillion euro mark soon. When I say that the European Union has invested more in Latin America and the Caribbean than in China, Japan, Russia and India combined, people usually look at me with wide eyes and don't believe it. But that is indeed the case: we have invested more in Latin America than in other regions of the world that are generally considered to have more growth potential. In purely commercial terms, however, China has surpassed us as trade partner for Latin America and the Caribbean. Although we remain by far the largest contributor of capital and technology to the region, we know that we need to strengthen our economic partnership with Latin America.

“Autonomy does not mean isolation. It requires intelligent cooperation and reliable partners to share experiences and technology, regulate new markets, innovate and connect secure infrastructures such as the transatlantic digital cable Bella or the Copernicus satellite network.”

Moreover, in the current geopolitical context, economic and political issues are closely linked. The lessons learned from the COVID-19 pandemic and the difficulties resulting from the geopolitical tensions heightened by the war against Ukraine, are driving us to strengthen our "strategic autonomy" on both sides of the Atlantic. However, autonomy does not mean isolation. Autonomy requires intelligent cooperation and reliable partners to reach agreements, share experiences and technology, regulate new markets, innovate and connect secure infrastructures such as the transatlantic digital cable Bella or the Copernicus satellite network. For the green transition as for the digital revolution, Latin America offers opportunities and has important needs. The European Union is ready and willing to work together with Latin America and the Caribbean in these areas.

However, this strengthened partnership cannot be built on the basis of the "extractivism" often practiced by Western companies during the 20th century in Latin America. Many of our interlocutors have told us, both during the ECLAC and CELAC debates, particularly with regard to the issue of lithium, a raw material critical for the green transition available in large quantities in Latin America. The region wants to take advantage of the new transitions to industrialize key sectors and add value to its productive capacity, diversifying global value chains on the basis of advanced social and environmental standards. The EU- LAC partnership can only develop by actively contributing to this purpose: the message has been received.

“Latin American and the Caribbean wants to take advantage of the new green and digital transitions to industrialize key sectors and add value to its productive capacity.”

What are the main conclusions we have drawn from these two days of intense debates? The first is the need to intensify regular political engagement at the highest level. We agreed to organize a summit of heads of state and government of EU and CELAC during the second half of next year, at the beginning of the Spanish Presidency. This is an important step forward: it will be the first one since 2015.

Complete our trade and commercial agreements

The second line of action is to complete our trade and association agreements. We need, in particular, to achieve the modernisation of the agreements with Chile and Mexico. We must also succeed in overcoming the remaining difficulties and finalise the EU-Mercosur agreement that we have been negotiating for twenty years. This agreement is much more than a trade agreement: in the current geopolitical context, this is a way to show our willingness to act together on the world stage. The ball is in our court. To unblock the situation, we must present to our Mercosur partners an additional protocol to clarify our joint commitments in the fight against climate change and deforestation and the protection of biodiversity.

The third line of action consists of developing our cooperation in areas of common interest: not missing the boat of the digital revolution, accelerating the green transition, developing our economic and energy cooperation, contributing together to the fight against inequalities, etc.

With the Bella cable, we have already established a major data highway between our two continents. We now need to develop the cooperation between our universities, researchers, civil societies… to fully use these new connectivity capacities. We also need to work together on standards and norms in the digital area to protect a safe and open internet safeguarding the rights of the users.

We have 230 million young people on both sides of the Atlantic: we must open the doors of Erasmus+ to develop student exchanges with the youth in Latin America and the Caribbean. Half of the students from Latin America who study abroad already do so in Europe and 20% in the United States.

We need to cooperate more closely to develop renewable energy, green hydrogen and batteries. Latin American hydrocarbons can also help us bridge the gap created by the Russian war against Ukraine.

In the areas of internal and external security, too, we have shared interests and challenges to fight together transnational organised crime, as we have already started with the EL PAcCTO programme. Drug trafficking is feeding greater interaction between European and Latin American based crime groups. Countries of production, transit and final markets must work together. We already cooperate with countries in the region bilaterally and through COPOLAD, our programme to support the countries of Latin America and the Caribbean in improving their drug policies.

“If we are to defeat the autocratic threat and improve our democracy as a space for freedom and justice, we can only do so together.”

The fourth line of action, which is perhaps the most important, is to collaborate in the promotion of a rules-based global order, based on peace, democracy and human rights. If we are to defeat the autocratic threat and improve our democracy as a space for freedom and justice, we can only do so together.

A lot of work to do

In short, these meetings have been an important step in this direction, but we still have a lot of work to ensure that our “other transatlantic relationship” can reach its full potential.

Uruguay and Argentina, key partners to bring the EU and Latin America closer