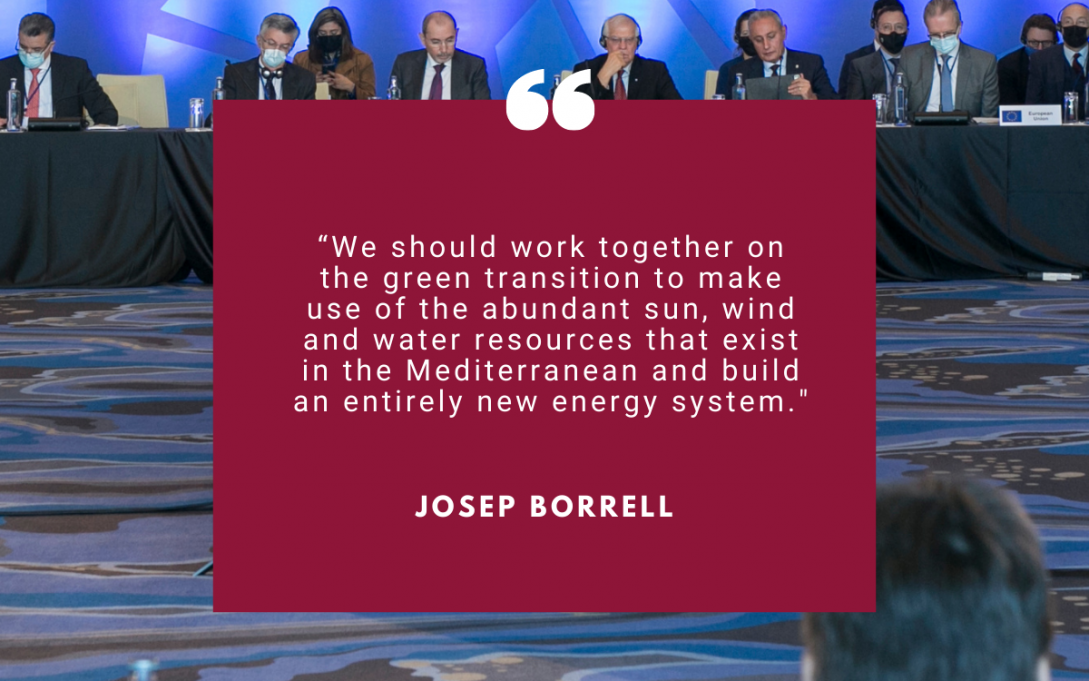 During last Sunday’s “Day of the Mediterranean ”, which was celebrated for the first time to remind us that “that our similarities largely overcome our differences,” I was asked what the Mediterranean means to me. It has a special place in my personal and political life. For me and many of my generation, the Mediterranean is the title of an iconic song by Joan Manuel Serrat that brings together many positive emotions and memories from my youth. And as Pope Francis recently said: "The Mediterranean has a special vocation: it is the sea of crossbreeding” and "this sea forces the peoples and cultures along its shores to be in constant proximity". But with view to the political responsibility that I have today, the Mediterranean is also a subject of worries: it has become a border that divides two worlds with enormous economic and social differences.

“The Mediterranean is the sea of crossbreeding’ – and also a subject of worries and a border that divides two worlds with enormous economic and social differences.”

Two worlds separated by a huge gap in revenues and living standards. According to World Bank data, the per capita GDP in the countries of the EU Southern Neighbourhood[1] was on average 6 times less than in the EU in 2020 (and 6.8 times if we consider only the four Maghreb countries). While we in Europe are ageing quickly, the population on the other shore is significantly younger: 31 % of people are under the age of 14, compared to 15% in Europe. Since 1990, the EU’s population grew by 6.5 %, while the population of the ten countries of our southern neighbours grew by 72%.

These divergences and the lack of personal and economic opportunities fuel persisting conflicts and the migration pressure. It explains why many people, mainly the young and the educated, look to cross the Mediterranean for a better and more prosperous life in Europe. But young people do not only seek jobs and better prospects, they also struggle with the consequences of political instability and mismanagement in some countries and the persisting conflicts and limits to basic freedoms.

“For the benefit of the societies on both shores we have to work together to tackle discrepancies and tensions.”

Many Europeans look at the Southern Neighbourhood mainly from that angle. Both with dismay as to desperate migrants losing their lives in the “blue cemetery” Mediterranean and with concerns about the migratory pressure and attempts to come to Europe irregularly. And they think about the persistent conflicts – in the Middle East, Libya and Syria –, and political instability.

But there is so much more to it. For the benefit of the societies on both shores we have to work together to tackle discrepancies and tensions and to reduce the ‘brain drain’ and achieve orderly migration. While the ageing societies in Europe need migration to maintain their prosperity, many Southern Neighbourhood countries also struggle with migratory pressure - some more as transit countries, others as country of destination.

We need to engage in developing a positive story. We must  learn from each other and build human and cultural links and exchanges. But above all, it requires to improve living conditions and to focus on creating jobs and economic growth. Because only if we achieve a more inclusive economic and human development and close the economic and wealth gap, we can overcome what separates us.

“Only if we achieve a more inclusive economic and human development and close the economic and wealth gap, we can overcome what separates us.”

To move this agenda forward, we held last Monday the Regional Forum of the Union for the Mediterranean and the EU-Southern Neighbourhood Ministerial Meeting that I (co-)chaired. To hold these meetings in Barcelona was very appropriate, not least because the so-called Barcelona Process that started there in 1995 laid the foundations for what became in 2008 the Union for the Mediterranean, which today brings together the EU member states and 15 countries from the Southern and Eastern shores of the Mediterranean). 26 years ago, I was part of this founding event as Spanish Minister of Public Works and Transports.

The meetings brought together a record number of Ministers of Foreign Affairs of the EU and the Southern Neighbourhood. Unfortunately, the representation from our Southern friends was not as high as hoped. Some ministers could not travel due the deteriorating sanitary situation but others attended instead of the Ministerial Conference of the Forum on China-Africa Cooperation. This is an indication of the global competition taking place and should push both sides of the Mediterranean to reflect well on the needs and the benefits of our cooperation - also compared to what others could offer.

We had wide-ranging discussions about what we can achieve together by implementing the Agenda for the Mediterranean and boost sustainable economic development and build more inclusive and equal societies. To help achieve this goal, the EU has put in place last year a new EU Economic and Investment Plan for the Southern Neighbourhood, which aims to allocate up to €7 billion for the period 2021-2027 in the region order to mobilise up to €30 billion in private and public investment  in the next decade. There is no space in this blog post to account for all the issues we covered, but let me focus on one concrete area that offers enormous, mutually beneficial opportunities and is a main challenge of our time - fighting climate change and accelerating the green transition.

“The Mediterranean is warming 20% faster than the rest of the world.”

The Mediterranean is warming 20% faster than the rest of the world. Climate change already causes major distress to Mediterranean societies, economies and infrastructure, affecting food and water security and regional stability. To fight climate change, the EU has an ambitious Green Deal agenda. To succeed on this way the EU will need to buy large quantities of green electricity in the future.

We should work together on the green transition to make use of the abundant sun, wind and water resources that exist in the region and build an entirely new energy system, based no longer on oil and gas, but on green electricity and hydrogen. Moving from fossil fuels to renewable energy sources is as much a necessity for our common future as it is an opportunity for economic diversification and growth on both shores of the Mediterranean - also for the oil and gas exporting countries in the region. COP 27, which we will take place in Egypt next year, must be a landmark for this renewed engagement.

For tackling climate change and managing the green transition, as well as for many other crucial issues: let us maintain high ambitions and deliver together the scale of action that is needed.